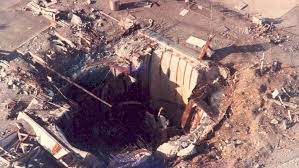 The Titan II Launch Complex 374-7 in Southside (Van Buren County), just north of Damascus (Van Buren and Faulkner counties), became the site of the most highly publicized disaster in the history of the Titan II missile program when its missile exploded within the launch duct on September 19, 1980. An Air Force airman was […]

The Tri-State Crematory scandal was a scandal at a crematorium in the Noble community in northwest Georgia that came to national attention in 2002. Nearly three hundred and fifty bodies that had been consigned to the crematory for proper disposition were discovered to have never been cremated, but instead dumped at several locations in and […]